About the Master Millers 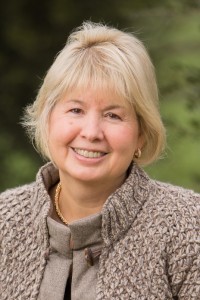 Karen’s physiology includes a palate so well dialed in to olive oil that her husband was able to leverage her taste into the design of the Bondolio orchard. In 2002 and 2003, during several trips to Southern Italy and Sicily, Malcolm would assemble the olive oils he was able to find in various city markets, village open air markets and family farms. Each night, Malcolm would perform a ‘blind test’ by presenting to Karen a flight of oils to rate. For Malcolm it was amazing to experience. Karen would invariably rate highest the oil that contained at least one of three cultivars. By the end of 2003 Malcolm knew the varietals he had to plant to have at least a fighting chance of producing the olive oil that would please Karen’s palate.

Today, Karen is an enthusiastic board member of the California Olive Oil Council and serves as its Treasurer. Karen recently achieved a Master Miller certificate from the Olive Center, UC Davis.

Karen’s background is the healthcare technology industry with particular skills in international marketing and product development. Karen’s career in medical sales and administration spans more than 30 years, beginning with Smith-Kline Beckman (GlaxoSmithKline) in 1977. At GlaxoSmithKline, she served as the Worldwide Medical Sales Manager for the medical imaging division. In 1985, she joined Loredan Biomedical, a manufacturer of computerized physical therapy equipment, as Vice President of World Wide Sales. She later became President.

As CEO of Cedaron since 1990, when she co-founded the company with Malcolm Bond and Gary Engle, Karen has lead the company’s exceptional growth, market expansion and product innovation. She earned a Bachelor of Art Degree from West Virginia University and a Master’s Degree from the University of Pittsburgh. 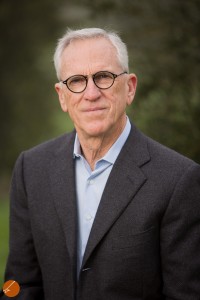 Malcolm could not be more supportive of Karen’s vision of producing one of the finest olive oils in the USA. Malcolm has a Master Miller certificate from the Olive Center, UC Davis.

Malcolm has more than 30 years’ experience in the medical industry and is a leading innovator in medical technology and software. In 1980, he founded Loredan Biomedical, Inc., a manufacturer of computerized physical therapy equipment. He built the company into a $25 million organization in four years and one of the fastest growing companies in the U.S. It was named one of Inc. Magazine’s ‘500 fastest growing private companies in the US’ both in 1989 and 1990. Malcolm holds several patents for rehabilitation system designs and outcomes management. He earned a Bachelor of Science Degree from University of California, Irvine. He has a Ph.D. in Physiology from University of California, Davis and has done Post Doctorate research at the University of Padova, Italy (The National Muscle Disease Research Center). He is an Honorary Research Fellow at the University College, London, England. 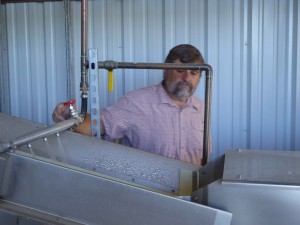 Gary is an invaluable asset to Bondolio. Besides being a master miller, Gary can identify and implement fixes to just about any problem encountered in the olive mill – electronics to mechanical, if something breaks, Gary finds a way to fix it.

Gary has a Master Miller certificate from the Olive Center, UC Davis.

Gary’s education includes a degree in electronic engineering from Sacramento State University. Gary holds several patents in the healthcare technology field. Gary has more than 25 years of experience in all phases of electronic and system design. He served as the Systems Engineering Manager for General Electric Medical Systems for six years and was the Lead Electronics Engineer at KLA Instruments Corporation for two years. In 1988, He joined Loredan Biomedical as the Senior Electronics Engineer for three years and later co-founded Cedaron Medical. Gary holds seven digital scan-conversion patents, as well as several patents for the design of rehabilitation systems. He earned a Bachelor of Science in Electrical Engineering from California State University, Sacramento. 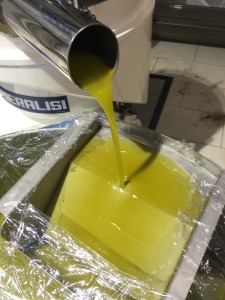 You are preordering, and securing your bottle of Bondolio’s 2016 Harvest Nouvelle Olive Oil in our 250ml or 500ml sizes. By preordering, you will receive your 2016 Nouvelle olive oil by Christmas.

Nouvelle Oil is our freshest oil just harvested and pressed which is only available during Christmas. The oil is the most pungent, fruity, and favorable at this time of year.  The oil will become more mild with time and the quality of our oil should last you three years. Nouvelle oil is extremely limited, and is based on a first come, first served basis. Place your order now to secure your bottle!

ORDERS WILL ARRIVE BEFORE CHRISTMAS

2015 Harvest Certified as “Extra-Virgin” by the COOC You can find the 2015 COOC Seal of Certification on all of Bondolio’s 2015 bottles. Purchasing olive oil with this seal means your are truly buying the very best!

“When you purchase olive oil with the COOC Seal of Certification, you know you are buying the best extra virgin olive oil made in California.

Let’s face it: many of the olive oils on the market today claim to be extra virgin, but aren’t. To give consumers confidence they are purchasing 100% extra virgin olive oil, the COOC created the COOC Certification Program.

In the certification program, California producers submit their olive oil for sensory evaluation, where a panel of certified tasters conducts a blind tasting, and chemical analysis, rigorous lab testing to confirm acidity levels and other aspects of the oil are on target.

Only after the oil has passed both tests, does it earn the right to display the COOC seal. Purchasing olive oil with the COOC means you are buying fresh, California grown, 100% extra virgin olive oil, the healthiest and most delicious olive oil on the market today.

Look for the California Olive Oil Council’s seal with the current harvest year on it to ensure you are purchasing certified extra virgin olive oil from California”!

The full list of COOC certified olive oils, including Bondolio, can be found at: http://cooc.com on the “about the seal” page. 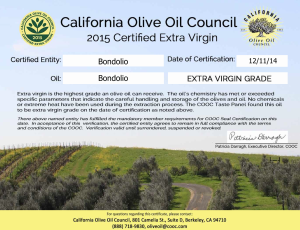 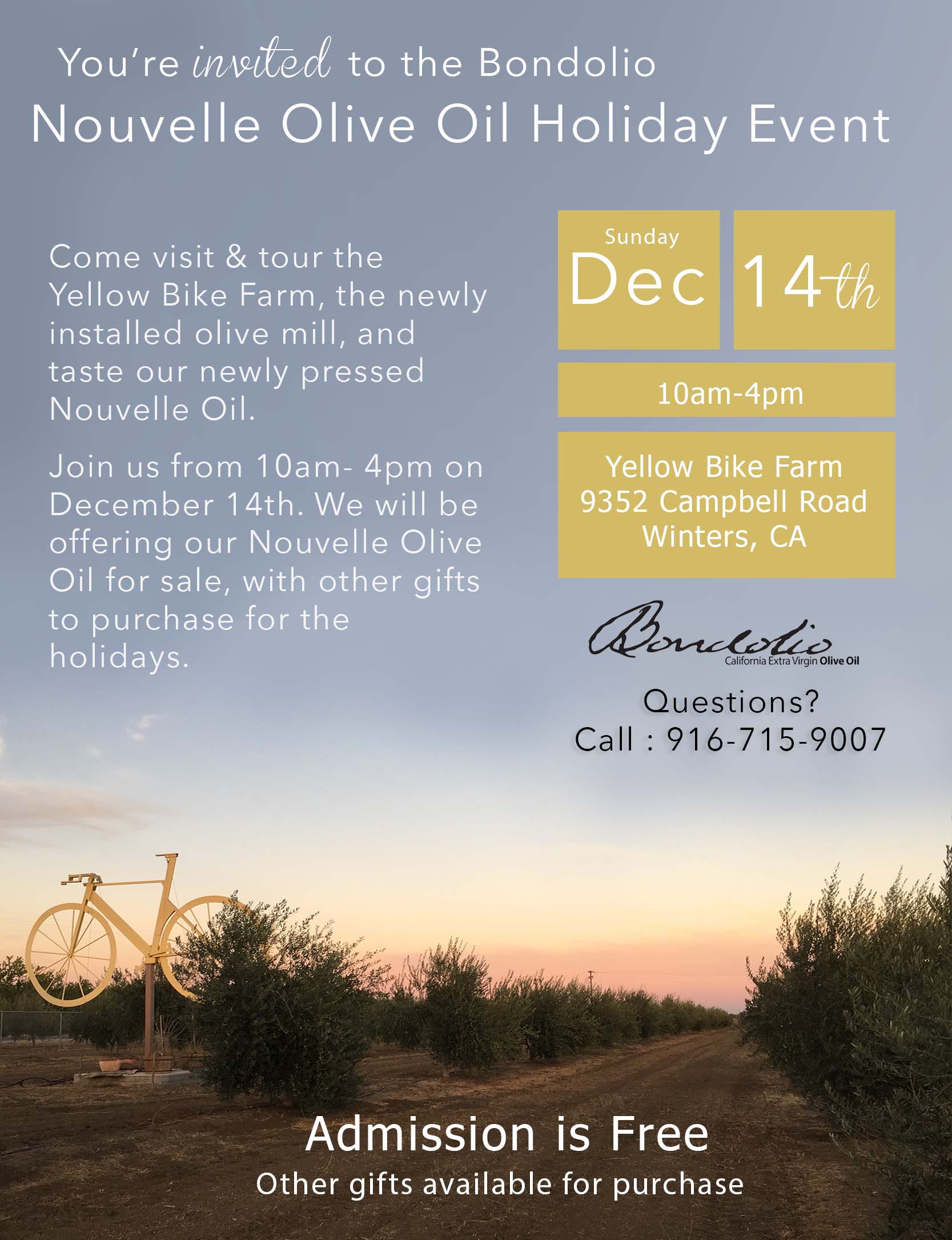 Join us on December 14, 2014 for our Nouvelle Holiday Event!

Harvest Sale! 15% off your purchase 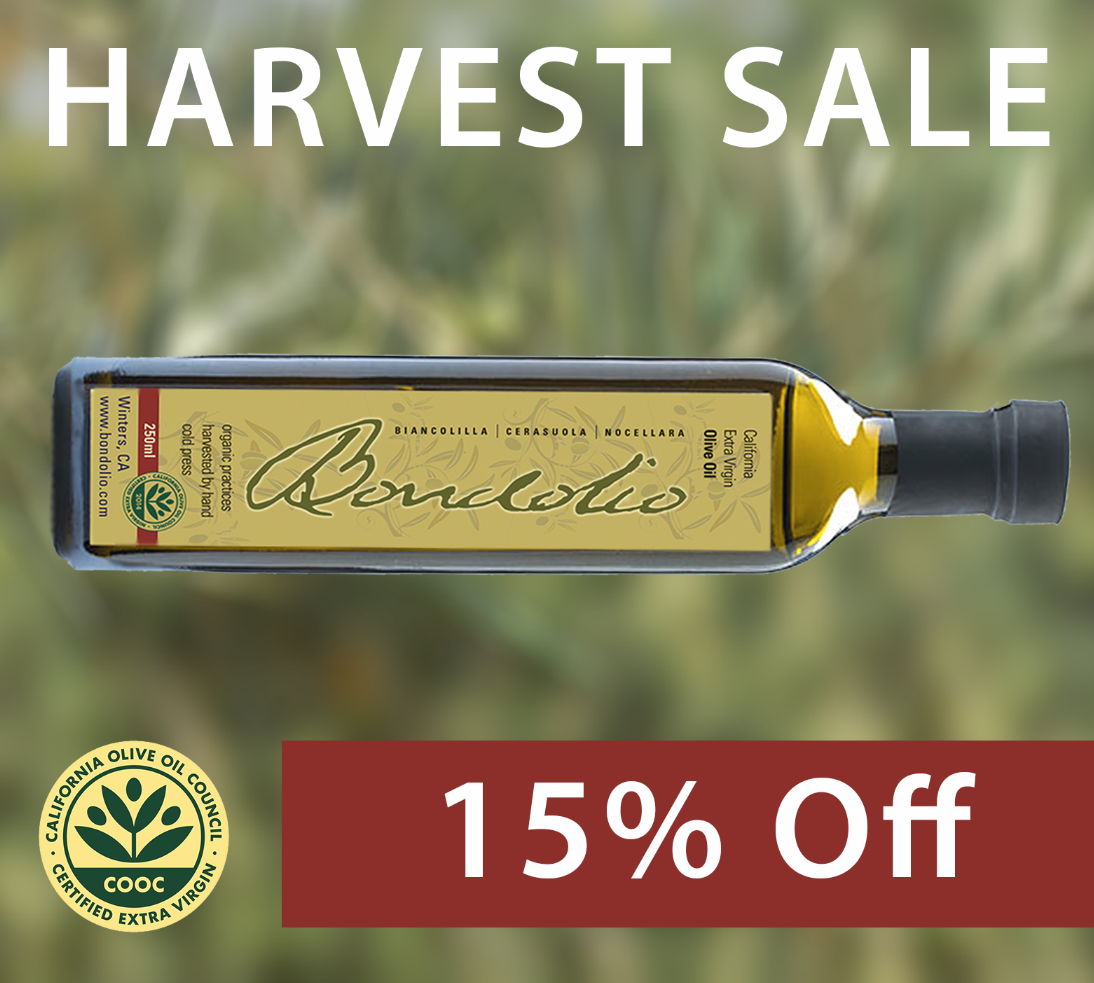 Stock up for the holidays with 15% off your entire purchase at our online store of 2014 olive oil, for a limited time.
Get it while it lasts!